On the way to work, I recall along the way passing by a beautiful cherry red bicycle locked outside a store. Having passed by the bicycle twice a day to and from work, I assumed the owner lived or worked nearby and didn't pay much attention. It wasn't until one day I noticed that the seat had been stolen and a week later, the wheels were missing. Over a time period of a month, the thieves much like vultures, slowly picked away at the remains piece by piece until all that was left was a dented, rusty old frame which remained for several years chained to the parking meter.

Whenever I pass by bicycles with handlebars missing, or oddly warping wheels that look as though it is melting to the ground like from a Salvador Dali painting, I have often thought to document the slow transformation I had previously observed. I found plenty of subjects to choose from while walking around the streets of New York. 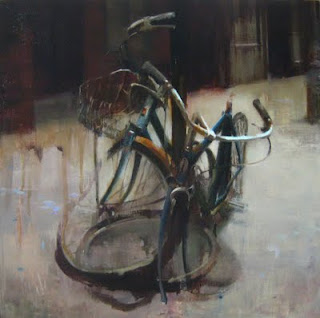 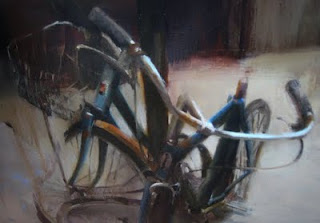 wow this is beautiful!

Love this painting. Is it going to be part of your upcoming exhibition?

Wow I love this painting. It's very surreal and mysterious. A bold and powerful piece.

Thank you, I appreciate it.